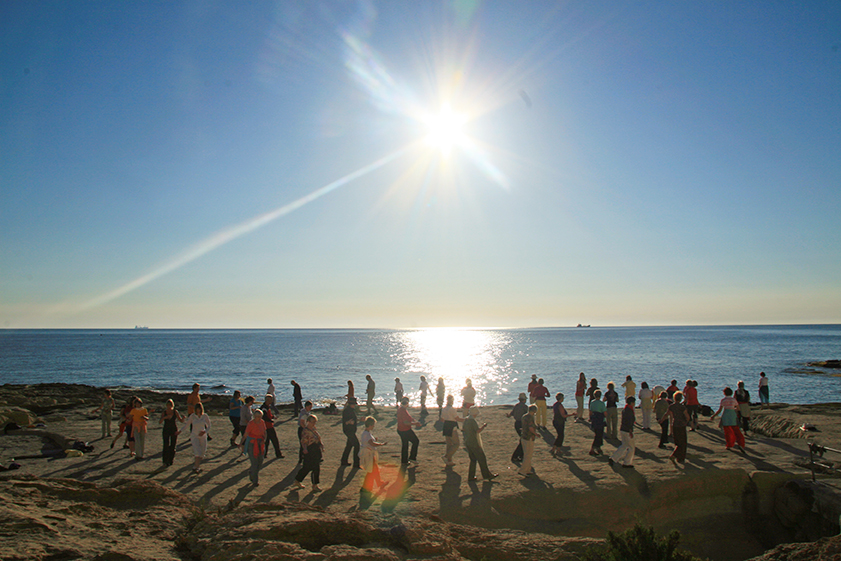 Who is Grandmaster Wei Ling Yi?

Wei Ling Yi is a world-renowned and recognised authority in the science of YiXue Culture.

He is the President of the World Qigong Head Office Association and since 1995 he has held seminar workshops and has lectured widely in Europe, America and other parts of the world.

The son of a well-known life-cultivation family, he has extraordinary capabilities that were discovered early. He subsequently received a demanding education. His most important teacher was his mother.

What is Yi Xue?

Wei Ling Yi teaches the Lotus Great System of which he is the sole inheritor in this generation. It is the highest form of ancient health and life cultivation.

The basic, underlying idea is to incorporate the experiences of the East and the West through science and culture and to promote a more humane civilisation in harmony with the natural environment.

Promoting the practice of YiXue Life Cultivation among the western scientific community is particularly important for the future because if scientists practise, it will enhance their abilities to reach new dimensions of knowledge still unknown today. This rests on the fact that the human brain stores cosmic energy and information.

How are personal good health and other benefits achieved?

The Lotus Great System which has been developed by Wei Ling Yi stands in the tradition of internal chemistry and makes use of the classical methods of relaxation, breathing accompanied by body movements, exercises in motion, meditation, visualisation, mantras, and transmission of Qi.

This is based on the Chinese tradition of the existence of a universal life-energy principle called “QI” which is a fundamental energy necessary for the vital functions of all beings.

What is Qi and its relation to health and illnesses?

Qi circulates within the body in the subtle energy channels called meridians and provides energy to every organ and to every single cell.

Illnesses develop if the energy circulation is disturbed for over a certain time, if blockages emerge in the flow of Qi or if the body takes negative information and accumulates it.

Wei Ling Yi, has developed a system of different exercises to combat various illnesses. These exercises reactivate the energy course in the body and make it harmonious by dispelling and eliminating harmful energies.

By practising regularly, the reception of oxygen in the organism increases and the cellular metabolism improves. The whole central nervous system, particularly the cerebral cortex and the pituitary gland are stimulated.

The mental and the physical aspects of the person will be balanced. Meridians and blood vessels relax and are more permeable thus improving the blood quality. The immune system is positively stimulated.

Can you give some examples of Grandmaster Wei Ling Yi’s activities in these fields?

Wei Ling Yi has dedicated many years of experiment and research to pave the way for YiXue as a medical and an academic subject in China.

In 1992 he started with another experiment giving teachings at many schools to improve the students` intellectual abilities. He could improve the knowledge and health condition successfully of over 90% of the students.

Thus Wei Ling Yi became well known in the field of education. In Germany he conducts seminar workshops on a regular basis for children with special difficulties such  as autism,  hyperactivity, dyslexia or ADHD cases. This initiative is now being adopted in Malta.

In 1993 he founded the First International Qigong University in Sichuan, China. He is well known for the education of high-level Chi Kung masters and experts in the unfolding of human potentials. Through the years, he has been recognised as an  expert in life science(s).

Grandmaster Wei Ling Yi is based with his teaching team in Nossen Germany, where seminars, courses and training are regularly held. He has been teaching in more than thirty countries worldwide including the USA, Sweden, Austria, Spain, Mexico, Thailand, Singapore, Malaysia, Portugal, Italy…and Malta.

What does the Lotus Symbol and System adopted by Wei Ling Yi mean?

The lotus encompasses a wide meaning. It is more than a plant, more than a symbol of morality. It is symbolic of the entire universe. The lotus expresses the principle governing the elevation, descent, opening and closing mechanism of Qi in the human body.

What do people who have experienced YiXue practice say?

Here are some examples:

I am a pedagogue and a life coach and I have obtained my degree in arts from the Royal University of Malta. I have since taught students from kindergarten to post university and trained and coached people of all ages coming from different background Throughout this journey I have personally encountered great physical and psychological challenges ranging from acute back pain, arthritis, non-functional gallbladder and lately Guillain Barre Syndrome. More than once doctors predicted that I had to get used to the idea of spending the rest of my life in a wheel chair. In 1999 I was blessed enough to have been introduced to Grandmaster Wei Ling Yi, and his Lotus Great System. Through this simple yet highly effective practise I managed to heal myself and speed up the recovery of all above mentioned condition in less than three months.

Eight years ago Master Wei Ling Yi by energy transmission and teachings, was also successful in healing my daughter’s Juvenile Depression within three weeks although specialists had envisaged that she needed to be on medicine for three full years!

I am a regular Lotus Gong practitioner and I always recommend this system to people I meet as I am my own testimonial of the incredible effects this method has on our system. It maintains a great balance physically, emotionally and psychologically. The benefits are endless and the results achieved vary. I have witnessed higher achievements in students’ learning abilities, fast progress in the healing process of children with the condition of Hyperactivity, ADD and Dyslexia and people suffering from Chronic Asthma, Fibromyalgia, Rheumatoid Arthritis, gastric pains and depressions to mention but a few.

Grandmaster Wei Ling Yi is always willing to share his vast knowledge about this subject and I cannot recommend often enough his integrity and wisdom to anyone who is seeking to improve himself on every level.

On 21st January, 2015 my mother, then an 88 year old, felt very weak on her legs and was unable to walk. We called our family doctor but he could not come as he was sick himself. So we called an ambulance and took her to hospital. At the Hospital Emergency Section they found her body temperature to be seven degrees below normal so she was diagnosed of suffering from hypothermia, weak heart and also a chest/lung infection.

On Saturday, 24th January I requested a transmission from Sifu Wei Ling Yi to help her and I sent her photograph for this purpose to Marianne Endriss, from the YiXue Education Center in Nossen, Germany.

She reacted positively and after two days (26th January) they transferred her from the emergency ward to a normal ward. She carried on, registering good progress and on the 13th of February, 2015 they transferred her to Karen Grech Hospital, a convalescence hospital for physiotherapy and further care. She was eventually dismissed from Karen Grech Hospital and returned home on the 13th of May, 2015.”

On Friday 30th January 2015 my mother 92 years old suffered from severe bronchitis.
She felt so bad that she asked the carers of the home she is in to send for us siblings to be by her side as she felt she was passing away. I was at school and I wanted to make it in time. On the way to the home I repeatedly called Wei Ling Yi’s name asking him to send her remote energy transmission. When I reached her bed she was in a terrible state. The doctor said the lungs were so infected and there was much liquid inside them. The heart beat was close to 160 and inspite of the oxygene mask she could barely breathe. We rushed her to hospital. I accompanied her in the ambulance asking for help from Wei Ling Yi.

By the following day she was off the oxygen mask but still weak not recalling how she had got to hospital.

By Sunday she had no fever, she was communicating with us as usual, she was eating normally and when I visited her she was sitting on an armchair. By Monday she could even walk to the bathroom and Tuesday 3rd January she was released from hospital, on the ground that her blood pressure was normal, heart beat regular, chest clear and communication was fine.